The role of the father when raising children (Part I)

HomeAll Post BlogAllThe role of the father when raising children... 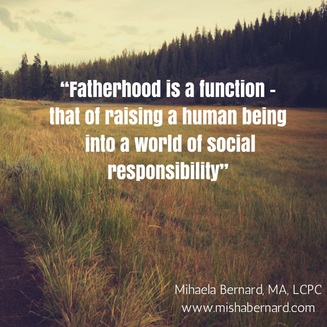 Regardless of whether you are about to join fatherhood, just welcomed your little one into the world or have been a father for a number of years now, the question of fatherhood is an important one not only for the individual but for our society as a whole.

In times when traditional family structures are changing and parenthood is no longer restricted to a man and a woman per se, the role of the father seems to be at jeopardy.

Like father like son
Think about the relationship you had with your father. If you are among the lucky bunch out there, your father was present and supportive, strict but fair, encouraging and authoritative, consistent and predictable, a role model with his own human flaws that were minor enough not to have a negative impact on you psychologically.

When you become a dad yourself, it is probably fair to say that you will father similarly, while also finding your own way in conjunction with your partner. It is easier to be a good father when you had one!

When dad is missing

Not everyone is that lucky, however. A high percentage of children, adolescents, and adults, who come for therapy, either struggle to connect with their fathers or have fathers who are absent, unavailable, abusive or too permissive.

This is especially true but certainly not limited to people, who struggle with psychosis, autistic spectrum disorders and self-injurious behaviors. Do not read this wrong – I am not trying to blame fathers for these disorders; rather, I am trying to emphasize how important fatherhood is for mental health and normal psychological development.

Being a dad is important
Fathers play a crucial role in their children’s growth and upbringing from the very beginning. In order for a person to be able to mother a baby, s/he needs the emotional support of a partner with a father function. This is easier said than done.

In fact, many men and women struggle with postpartum depression, anxiety and other mental illness during the first year of their children’s lives due to the renegotiation of priorities and the changes a child introduces into a person’s life. Some psychotics, for example, who have never shown symptoms of mental illness, may develop their first psychotic breaks when they enter parenthood.

What does it mean to be a father
To call yourself a father, it takes more than simply giving your last name to a child. Just because you made a baby, doesn’t make you their father either, and vice versa – you can be a father to a child you did not conceive.

One of the main tasks of the father is to introduce the law and to usher his child into social responsibility. Fatherhood is a function – that of raising a human being into a world of social responsibility where actions have consequences and where one knows the difference between right and wrong, and good and bad.

For more articles on common mental health issues, affecting you and your family, subscribe to Mental Health Digest and get the latest issue emailed to you today by leaving your name and email address in the contact form here.

Do you have questions? I would love to hear from you.